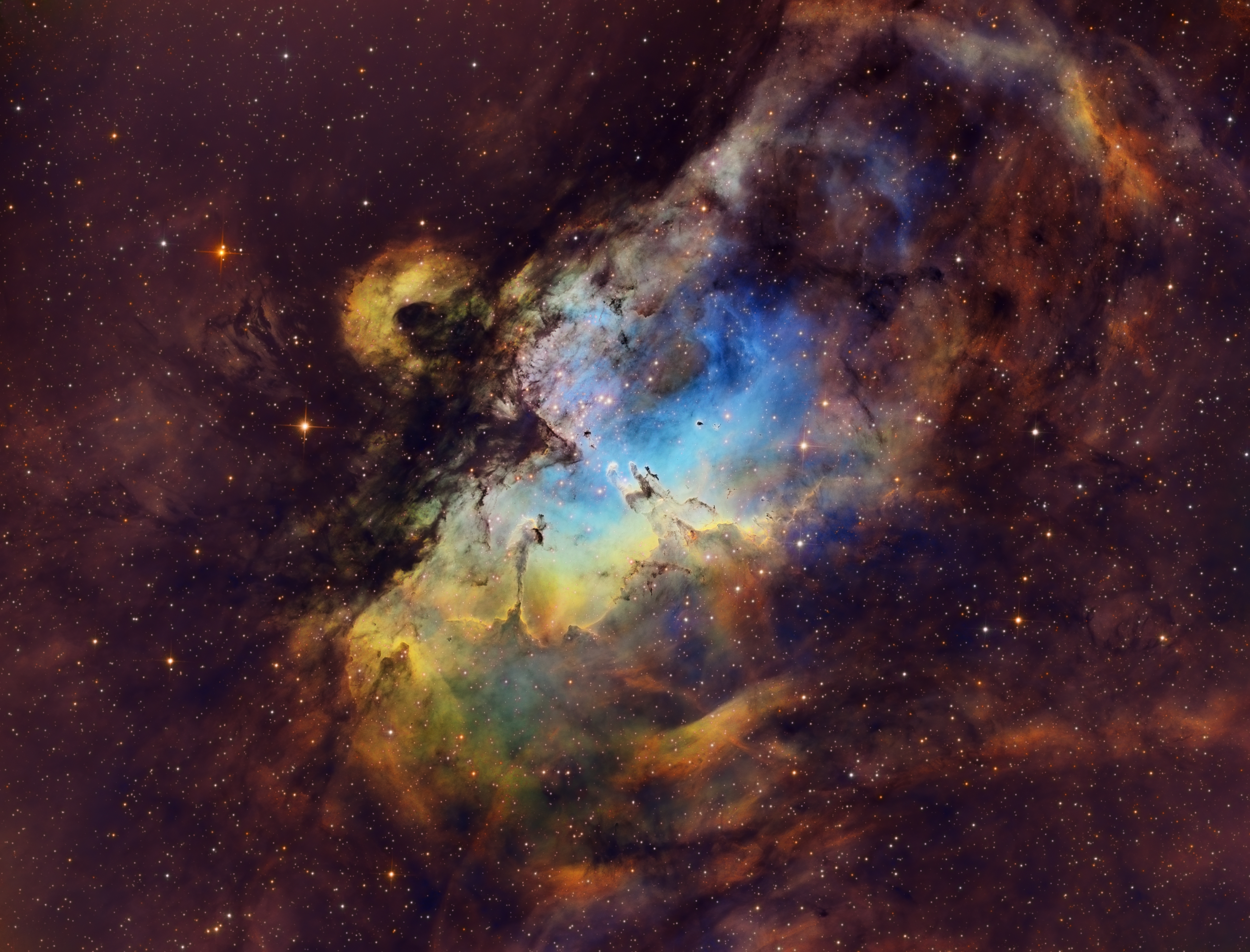 M16 or perhaps more specifically the pillars of creations is probably one of the most 'famous' targets having grown up seeing the hubble images of this nebula. I'm amazed at how much detail mere amateurs can achieve on this target, and it even makes you appreciate hubbles image scale and resolution all the more when you put the two side to side. I initially started imaging this target 2 months ago and acquired all the Ha then, however focuser issues, weather and study kept me from finishing off the SII and OIII datasets. Then about 2 weeks ago I got a new moonlite to replace the stock GSO focuser I broke when trying to inspect prior issues, I was then gifted a good clear night last weekend which let me finish the dataset. Processing was done over 2 days. Enjoy!

Dark Calibration SFS/Registration/integration/Drizzle Integration 1x Decon on all channels (there seemed to be good structure on all 3) TGV and MMT NR on OIII and SII DBE on all 3 HT on all 3 to roughly same levels Linear fitted to Ha RGB Combination (SHO) Invert SCNR Invert to remove magenta stars Played with a/b channel curves to shift the green tone to the orange background you see (thanks to /u/KBALLZZ for his scorpion write up) Contrast Curve, Saturation Curve Colour Saturation to the blues LHE with range mask on BG and on bright regions. Did a few contrast adjustments, primarily HDRMT on the core and LHE on the bg on the Ha stack and then LRGB combined it using this Ha as the luminance. Remastering: Applied a S contrast curve. Created a starless version using starnet, subtracted this from original to get original stars. Applied topaz denoise to the starless bg, added original stars back in. Other Notes: Tried out 1x drizzle and it definitely does seem to improve the noise profile. Using the method /u/buras details for decon (which is simply decon without deringing and adding stars back later), I figured out a good way to make a star mask, using starnet to create the initial mask, binarized it to reveal any faint non star structures, clone stamp non star structures out, then convolving the mask. If the size doesnt match the stars then some morphologicial dialtion fixes this. This is also my first time using Ha as luminance, I really like the effect it produces in terms of star reduction and makes the image look a lot cleaner. I did enable chrominance NR when doing the LRGB comb and it does seem to produce a bit of smoothed out halos around the stars, I tried without and I still had halos that were more contrasty and my colour was obviously still noisey. This effect still occured after some acdnr on the RGB before LRGB comb.
Date Created: 2019-07-07
Date Posted: 2019-07-09